After ten years (yes, ten years!) Jazz re:freshed has finally been included in the listings for the London Jazz Festival. And what are we going to do? we hear you ask… we are taking one of the most traditional forms of jazz and flipping it on its head.

The Jazz re:freshed ethos has always been to challenge the definitions in the media and popular press which define jazz music as an easy listening, stuck-in-the-past music form; whilst bringing the incredibly diverse, colourful, expressive and creative world that is jazz to the people – live, fun and affordable.

They continue to push the boundaries of jazz by presenting Grant Windsor’s Broken Big Band. Windsor takes on the traditional ‘big band’ by flipping it on its head with arrangements of electronic music, hip hop and original compositions; all this in a venue unfamiliar to the sight and sounds of the BIG BAND..

Recent collaborations as a writer/sideman include tracks for the new Jose James record No Beginning, No End on Blue Note records. 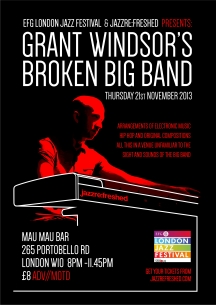 £8 in advance, more on the door

Get your tickets HERE

forget what you think you know about jazz

Jazz, Funk, and Soul from Atlanta and Beyond

Sewing, making and creating...most of the time.